skip to main | skip to sidebar

I shall be telling this with a sigh

Two roads diverged in a wood, and I—

I took the one less traveled by,

And that has made all the difference.

When I, somewhere ages and ages hence, am telling this, perhaps I will depart from Robert Frost and say, with a sigh, that although I took the road less traveled by, it made no difference at all. This will, of course, be only partially true—an echo of petulance long since forgotten, a response to tenderness not quite forgotten.

Or, more likely, I will not refer to Frost at all. I will say with a giggle that I liked moving so much that I transplanted myself across the Atlantic not once but twice, and this I did in one fateful month, many years ago... 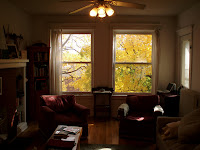 But today I say things with a sigh, because it is fall in Chicago, and yellow-leaved, damp fall in Chicago invites sentimentality, and wallowing, and a little Robert Frost. And it invites musing—on journeys taken that finished unexpectedly; on places seen that were beautiful; on almost-homes in other-lives that ended abruptly; on cities, begrudgingly loved, that welcomed me back without grudges. 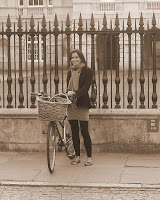 One of the first things I did in Cambridge was to buy a bicycle. 35 pounds or so got me a slightly battered Raleigh bike, purple with a tattered wicker basket. 5 pounds at the local Tesco got me a set of lights, and a little bell whose faint ding!—more an ‘um, excuse me’ than a ‘get out of my way’—betrayed its owner’s thrift. Undeterred by the twigs that had flown off the mouldering basket as I pedalled happily from Madingley Road to the center of town (an unwitting Hansel-and-Gretel trail of damp wood, pointing my way back home), I loaded it up with frozen Indian appetizers and Grown-in-the-UK (complete with a picture of the farmer) apples and lettuce from the local Sainsbury’s. 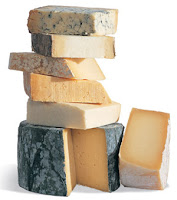 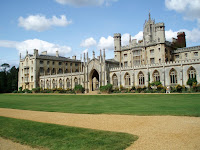 As I biked through town, I wondered that such a place existed. The colleges, centuries old, no two alike, basked in their exclusivity. I could catch glimpses of dusty libraries through lit windows, of immaculate lawns on which no mere mortal (save for those awarded the coveted status of ‘Fellow’) might tread. Tradition, tradition, tradition—keeping things beautiful, keeping things elusive.

Even clogged with punts, the River Cam is beautiful. The colleges line it, privileged and gracious. 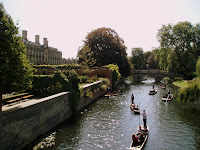 The architecture is human-scale. And a second look is richly rewarded with interesting details. I was partial to the heads, like this one... 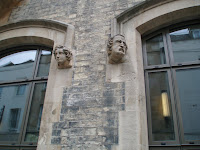 and the wooly mammoth. 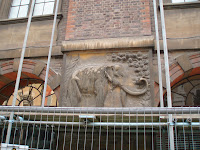 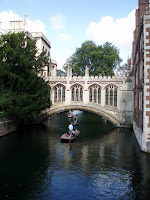 And the Ponte dei Sospiri, a bit of Venice transplanted to rainy England. 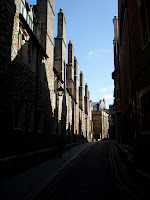 But in the evening, it was impossibly beautiful. When the students and the members and the fellows trotted off in orderly fashion to their rooms and their dinners, it became another place entirely. Empty cobblestone streets, locked wrought-iron gates, church bells, cows grazing unflappably in the commons, ducks paddling in the now peaceful Cam. For the outsider, the not-quite-graduated University of Chicago student, a world away from the sirens and potholes of Hyde Park.

Signs of the Darwin year were everywhere, but understated. An exhibit of “Darwin-inspired art” at the Fitzwilliam, conferences if one looked carefully, a window of Darwinia in the Cambridge UP bookstore.. Signing up for my Cambridge Library Card, I looked idly at the display cases just outside the library office and found Darwin sketchbooks, caricatures of Darwin, correspondence between Darwin and his father. 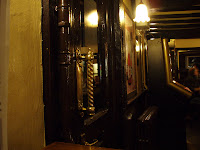 The number of pubs in a town so small was astonishing. There were the chains, of course, which were lovely, but occasionally lacking in character. The Mitre—reliable, sometimes full of undergrads, promising Pub Trivia when the semester started. But the real jewels were hidden, The Pickerel, for instance, going for several hundred years, with its crooked ceilings and dark wood. 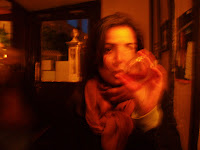 Thus inspired, we printed off a map of Cambridge pubs, intending to make our way through the list, and record our impressions in a blog—an other-blog, for the other-life. 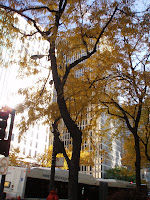 Chicago is not human-scale. Each year it seeks new ways to wiggle its way into the lists of the world’s tallest buildings. Having lost the Olympic bid, though, it settles back into its old, sometimes shabby self. Potholes remain unfilled, life goes on as before. The sidewalks buckle from tree roots. 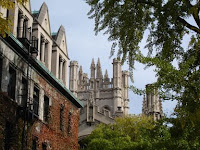 Cobblestone is restricted to the neo-Cambridge world of the University of Chicago, where professors are addressed by their first names. Nobody wears gowns here. Nobody cares if you walk on the lawns. Few traditions, but few pretenses. A little beauty lost, a little humility gained.

And so back to sentimentality and nostalgia:

Of the two roads I saw, one was the more uncertain. I took it---with hope---and it made no difference.

Wish I would still see Cambridge the way you see it... 18 months here have taken its toll on us and we now hate it. Maybe things would be different if the road you took didn't give up under your feet. I miss you so! Can't wait to see you in Ottawa, Chicago or Houston :)

Forgot to say that you gave us the courage to leave this place, pursue our dreams, sell all our things to fund our dogs travel and start all over again. You're a star!

Erika this is so beautifully written and it brought a tear to my eye - and then a laugh when I saw that the whole thing was posted by Cocomutt. She is so secretly articulate and dignified.